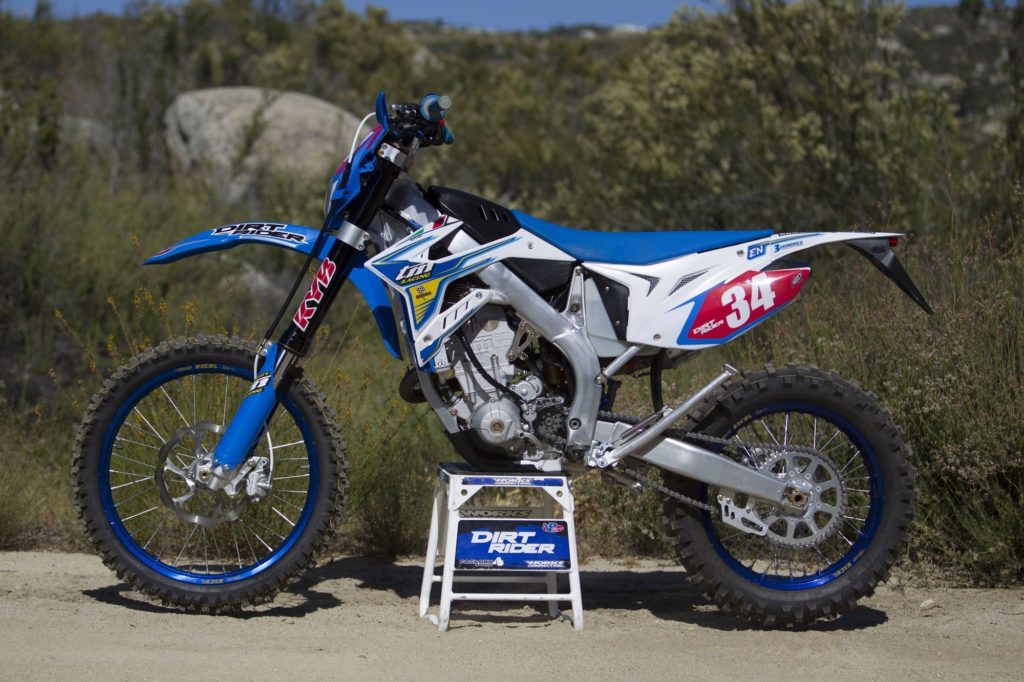 A kickstand and lights must mean this is an enduro machine.
Photo By Sean Klinger

We are going to start off with the obvious. This dirt bike is $10,995 dollars. That is a lot of money for any motorcycle, let alone an off-road focused machine without a license plate. But, to be fair, the price isn’t something that is at the forefront of our minds when we test a bike and the same is true for this machine. Why is it so expensive? Well, TM would argue that it is so expensive because it’s the best! We would argue that it is so expensive because of it’s exclusivity, manufacturing process (more hands-on and labor intensive), and because this 300cc four-stroke engine is their latest and most R&D’d powerplant to date. 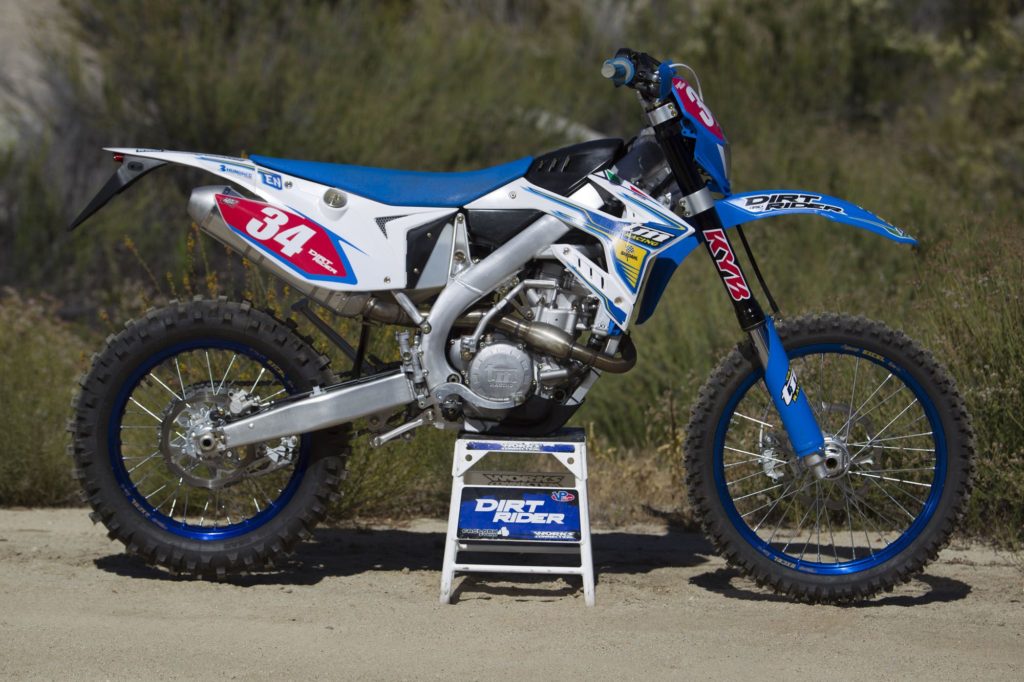 What you get for that massive clump of cash is a light blue bike that no one can deny looks pretty trick. A unique feature of the EN 300 Fi is that the tank and air box have been switched but the air/fuel mixture still goes into the cylinder from the back and the exhaust comes out the front. To fill the bike with fuel, you take your gas can to the gas cap on the left shroud rather than behind the handlebar. There are six speeds to help you crawl through the tightest of the tight and blast down open trail at warp speed (just an approximation). Suspension duties are taken care of by a KYB 48 dual-spring fork (not the same as Yamaha’s) and an in-house TM shock. The EN also has the magic button with kickstart backup and it is fuel injected, yet it still has a choke (and a horn which comes in handy when you want to make your buddies jump out out of their riding boots or, more practically, let people know where you are when separated). 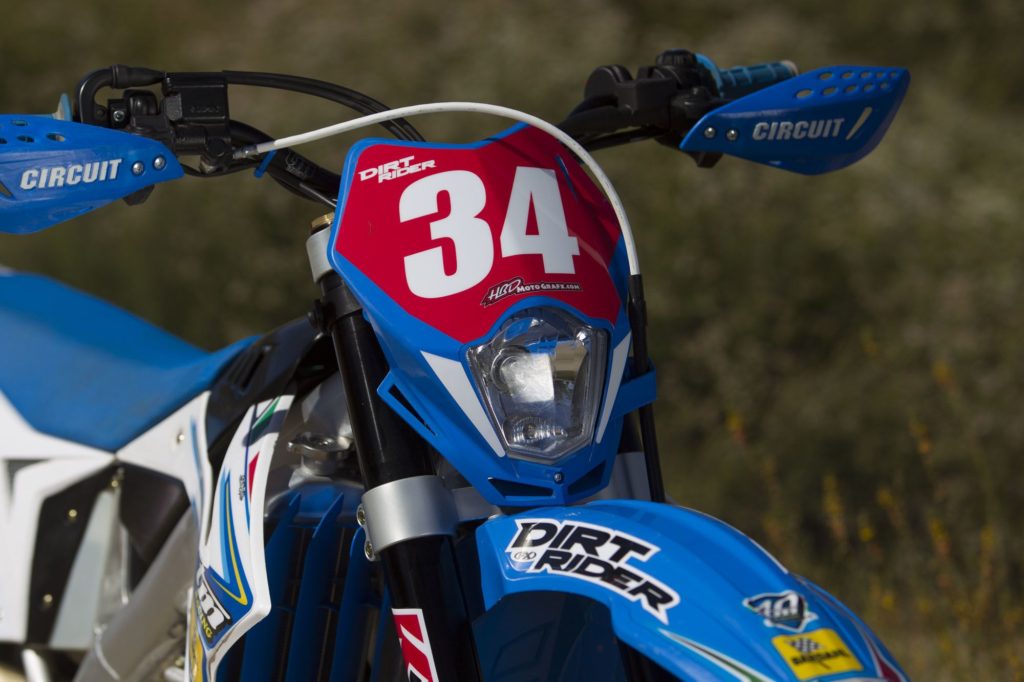 We didn’t ride at night but its nice to have a headlight just in case.
Photo By Sean Klinger

ENERGIA [power]
While modern small-bore four-strokes are getting more and more fast revving and snappy, the TM’s motor harkens back to a different time. Don’t get us wrong, the throttle response is great, thanks to FI, and the power is meaty and not lacking. It’s just that it has a more retro, chuggy feel rather than the free revving excitement that say the YZ250F or KX250F have. The bottom end is torquey and it actually has ton of top end and just keeps pulling. Where the EN is a little lackluster is in the mid-range. While on the trails, we found ourselves either 1/8 throttle or wide open, mostly because the bottom end worked for most stuff, but when the trail opened up we just sort of skipped over the midrange and landed straight in the top-end. If you don’t ride with ear plugs, this bike will make you want to. The overall sound output isn’t bad, just the intake noise is obnoxiously loud to the rider. 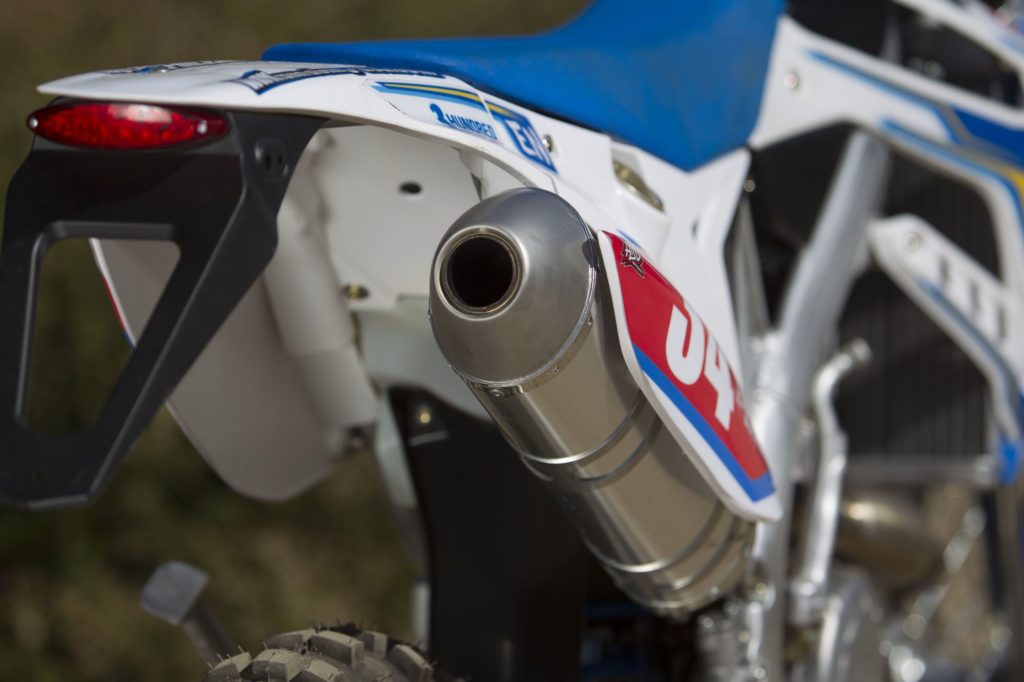 The exhaust doesn’t feel corked up but it isn’t overly loud either.
Photo By Sean Klinger

SOSPENSIONE [suspension]
This was a surprise for us. Most of the time when we get European off-road bikes, and some Japanese off-road bikes, they are very soft. That’s great for slow, tight, rocky trails, but not much else. The TM EN 300 Fi is the opposite. It almost felt like moto suspension. But to be fair, our TM media representative told us that the bikes that come over the pond don’t have “stock” settings. He basically just puts the fork and shock in the middle of their adjustment range. For us, this was too stiff and we backed out the fork compression two clicks and the fork rebound four clicks. This helped the fork go from deflect-y and ridged feeling to having a little more comfort but still having great amount of usable performance. The shock was less finicky though we did go two clicks softer on the shock rebound to free it up and help it get a little more traction. 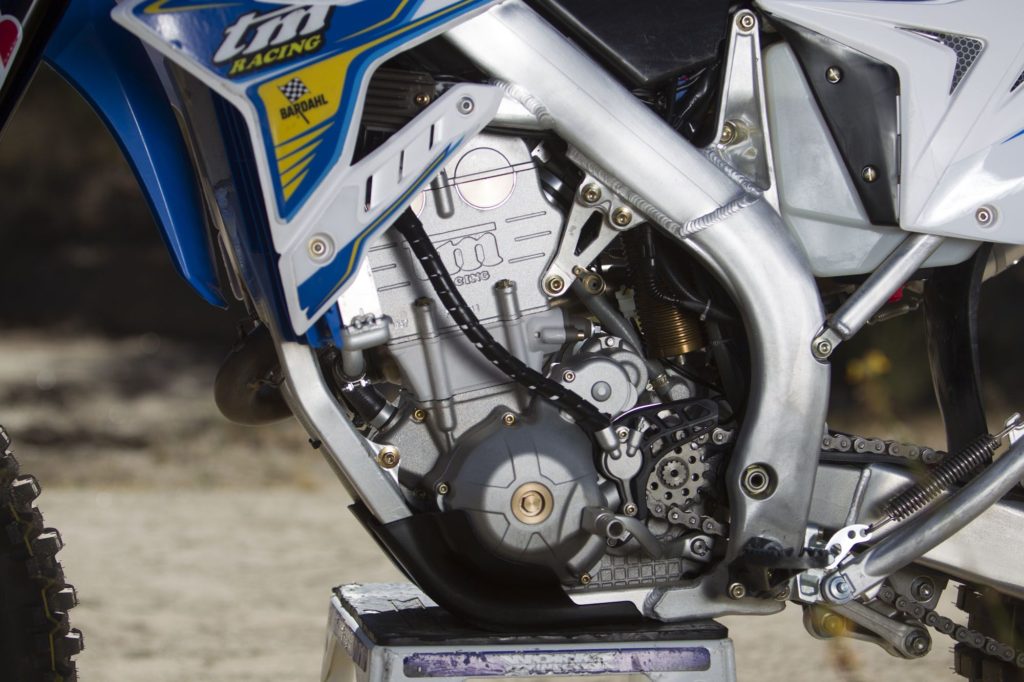 MANEGGIO [handling]
Planted and good at cornering? Yep. The TM is surprisingly easy to turn and the front wheel has great traction and resists pushing in corners. That being said, it also feels glued to the ground and not dancy or skate-y. Perhaps it’s the tank being lower and further back, but we liked that the TM went where we wanted it to go and didn’t take much energy to get it there. The riding position reminds us of a 2000’s Honda meaning that it is very familiar, not too thin, with a little bit of a ‘sit-in’ feel rather than the modern ‘sit-on’ orientation. 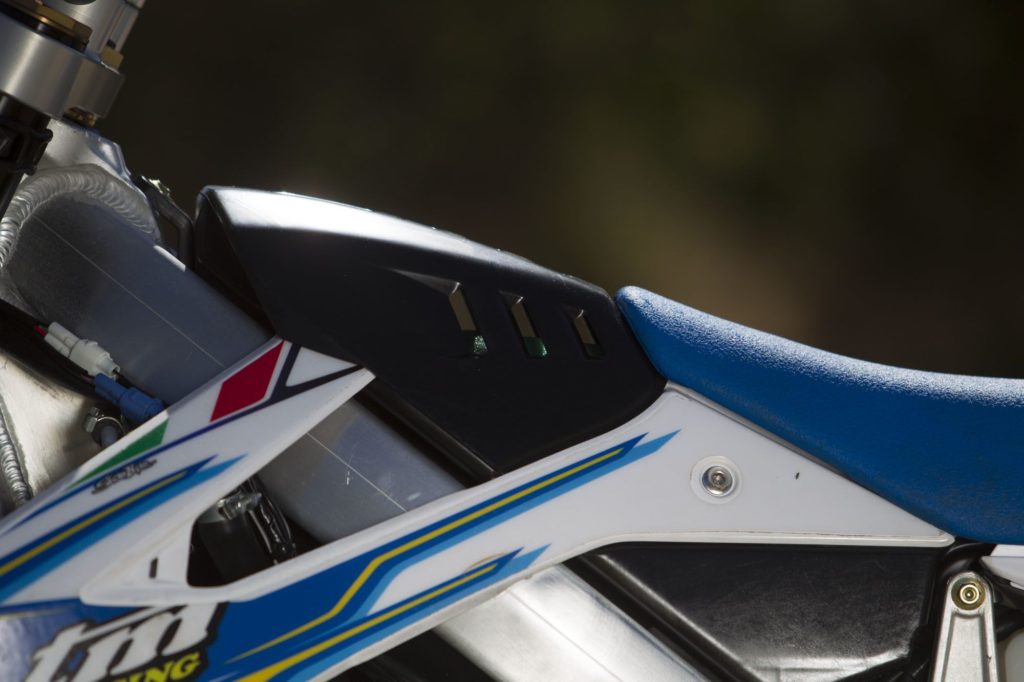 COMPLESSIVAMENTE [overall]
Who is this bike for? Well, the TM is a little hard to pigeon hole to one type of rider. Our gut reaction is the vet dude with too much money on his hands, and while that’s true, the EN 300 Fi has too much performance and is too much fun to relegate it to mellow trail riders. Could it be raced? Absolutely. Not motocross, but we would be more than happy tackling a GNCC or an enduro on this machine. 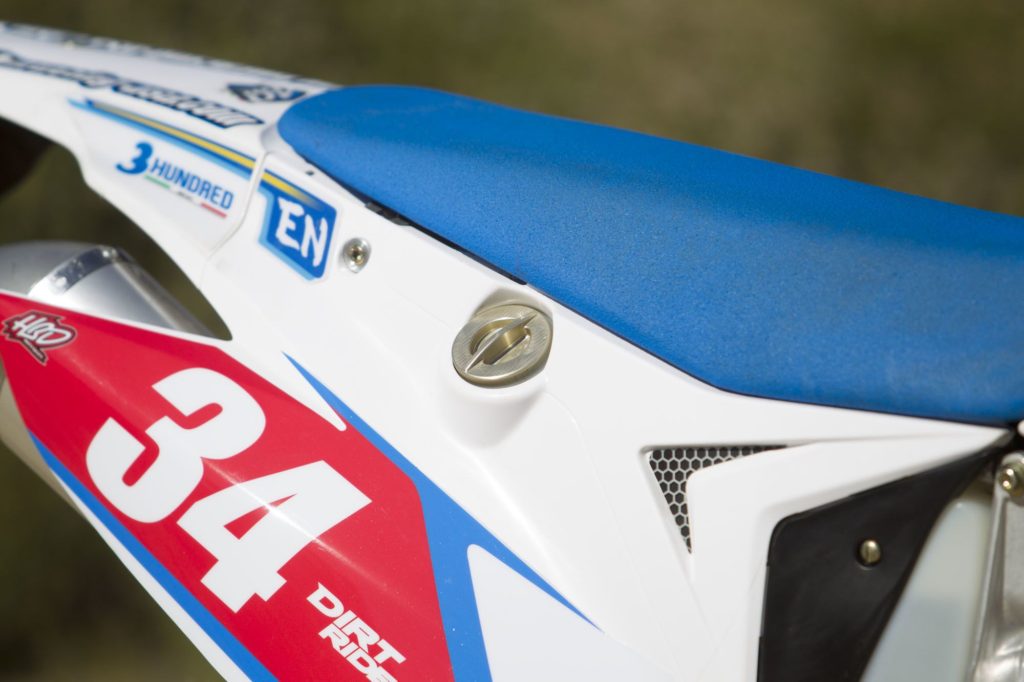 And this is where you fill your tank.
Photo By Sean Klinger

Andrew Oldar – Age 25, 5’10”, 130 lbs. Off-Road Intermediate
The meat of the powerband is found on the top-end while the midrange is somewhat lacking. The bottom-end power is good, but it would be nice to have little more for tight trails and stop-and-go scenarios. The fork is on the stiff side for an off-road bike. Having primarily ridden motocross over the past five years, I enjoyed this as I am used to riding with a stiffer fork setup. I didn’t have to worry about bottoming it out as it stayed up in the stroke on large impacts. The downside to this setup is the front end sometimes wandered in loose and rocky terrain. The rear shock absorbed all of the big impacts well, but I would opt for a softer spring rate if this were my personal bike seeing as I weigh only 130 pounds. The biggest downside to the rear shock is that setting the sag is difficult due to the special lock ring. Overall, I enjoyed riding the TM on tight and technical trails as well as high-speed off-road loops. Because of the stiff front fork and strong top-end power, I feel I could comfortably ride this bike on a motocross track, too. 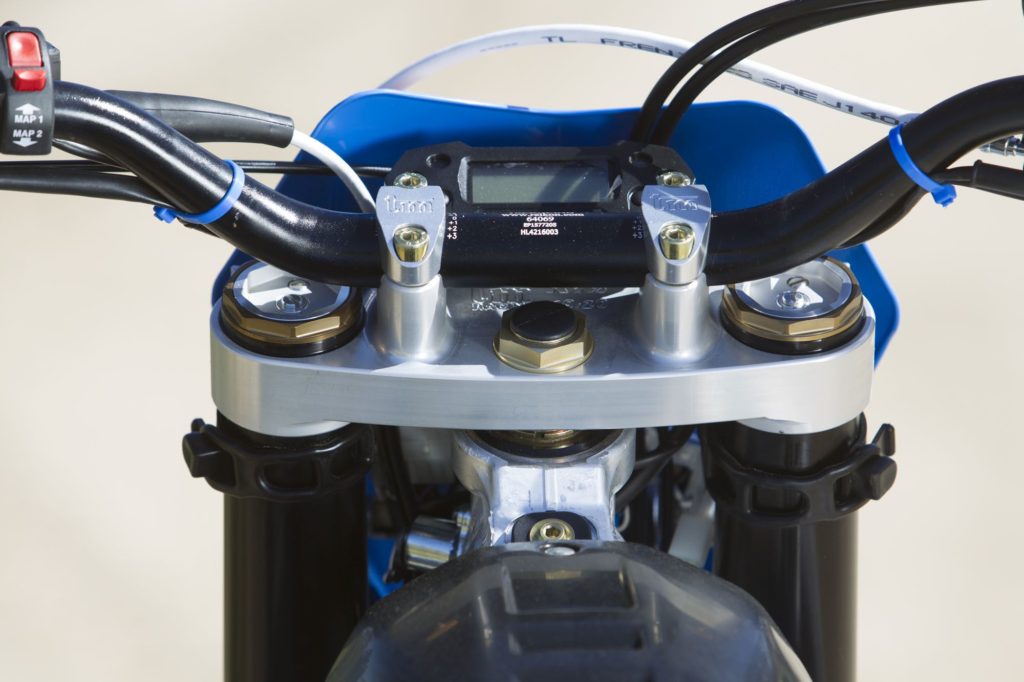 Ryan Orr – Age 38, 5’10”, 175 lbs. Off-Road Expert
Ergonomically this bike fits my 5′ 10″ stature really well. Open cockpit, fairly flat seat making it easy to get up on the “tank”(air box) for corners. Has an average width at the shrouds as well as the “air box”(gas tank) making it easy to maneuver with your legs. The motor feels really good at at 300cc displacement. Decent throttle response with a smooth usable bottom end that pulls into a long linear power curve. Has plenty of torque and revs to the moon. The only problem is that when you get it high into the rev’s, the noise from the air box is almost ear piercing. Ear plugs are a must!! The bike handles pretty good. It’s balanced and maneuverable through the tight stuff as well as stable in the high speed sections. It settles into corners, holds tight and tracks well out of the corner even in chop. The main complaint I have with the handling is the forks. The forks were firm on the initial part of the stroke and seemed to stay firm throughout. The front was deflecting off small bumps and rocks and even when I was going through the stroke on braking bumps. The front tire didn’t track through feeling like there was no rebound. 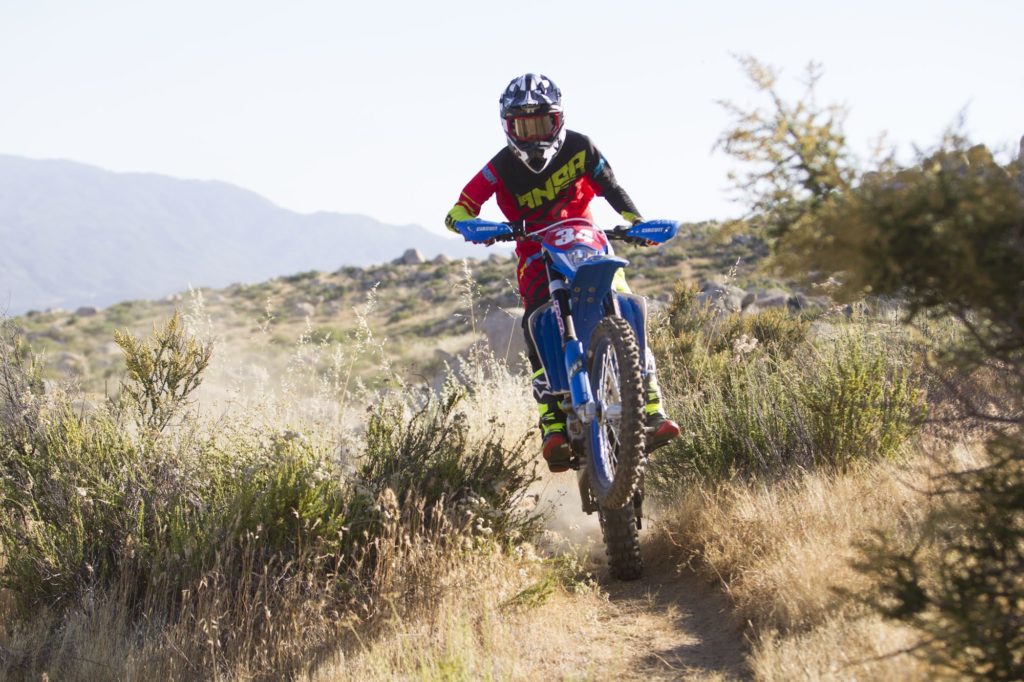 For the full test, keep your eyes peeled for the August issue of Dirt Rider.

What’s Hot
• Turns like a champ and is stable too
• Very usable power, suits a variety of riders
• Suspension wants to be ridden hard 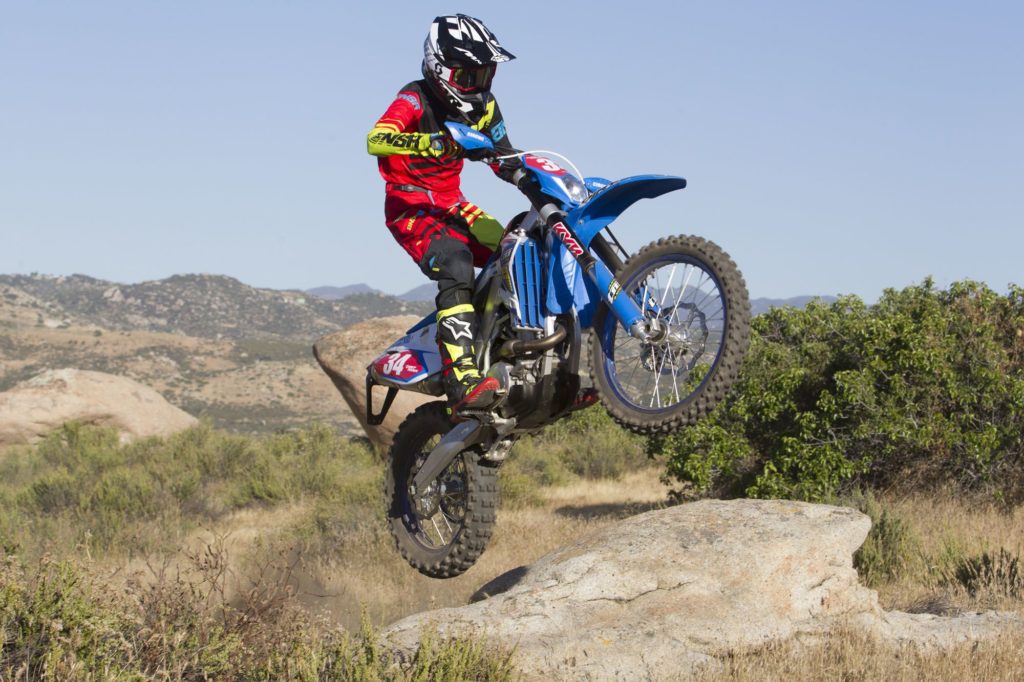 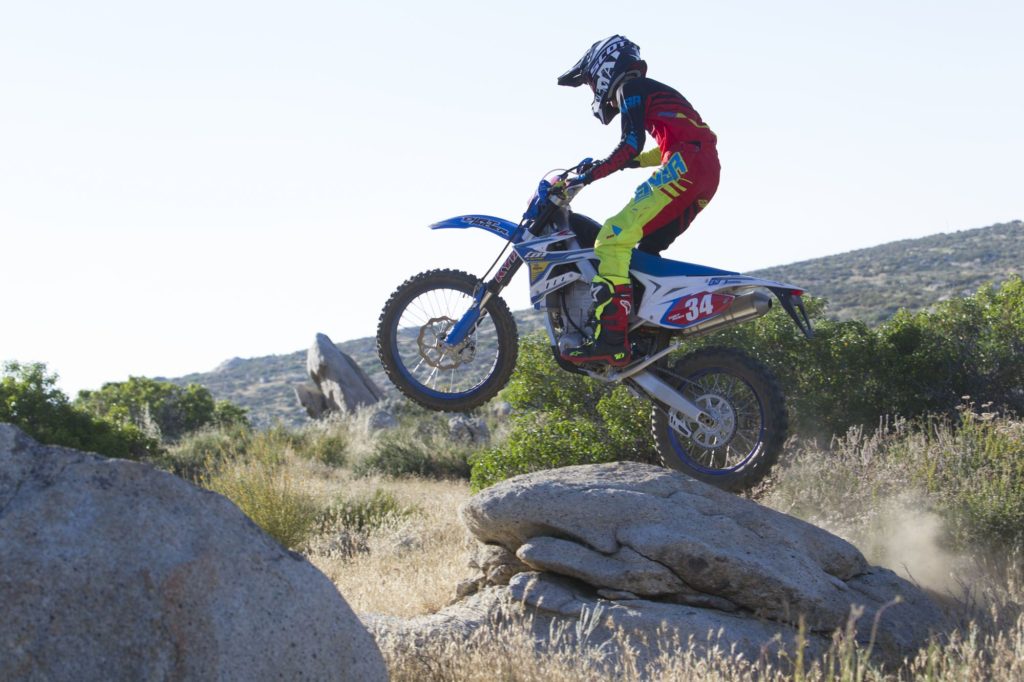 The TM has a very familiar rider compartment.
Photo By Sean Klinger 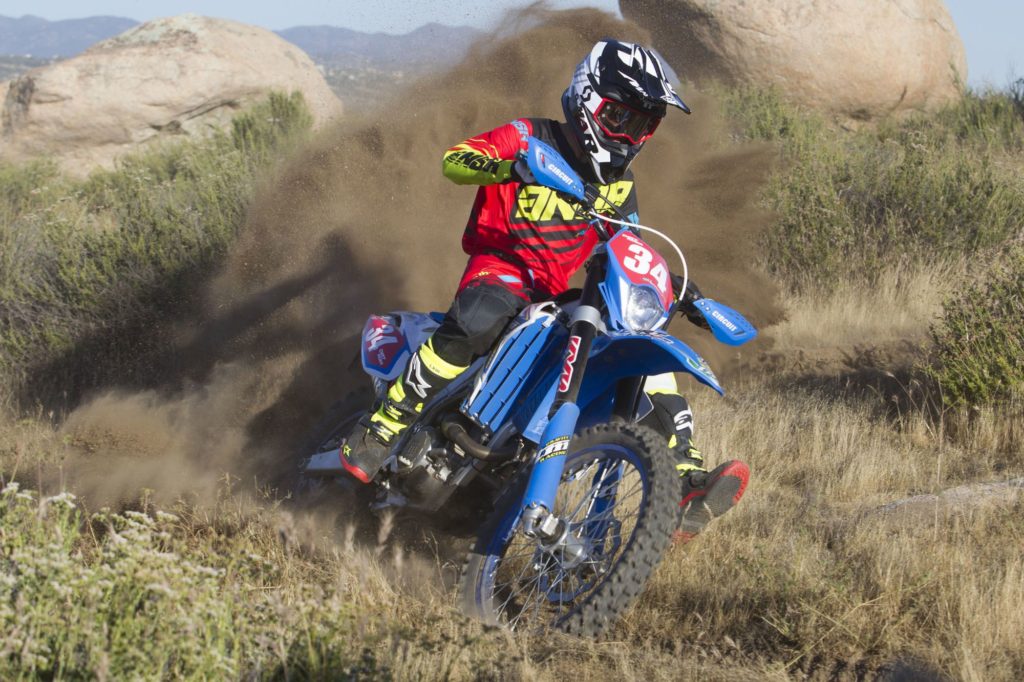 This machine turns like a champ, especially if you are a front-end steering rider.
Photo By Sean Klinger 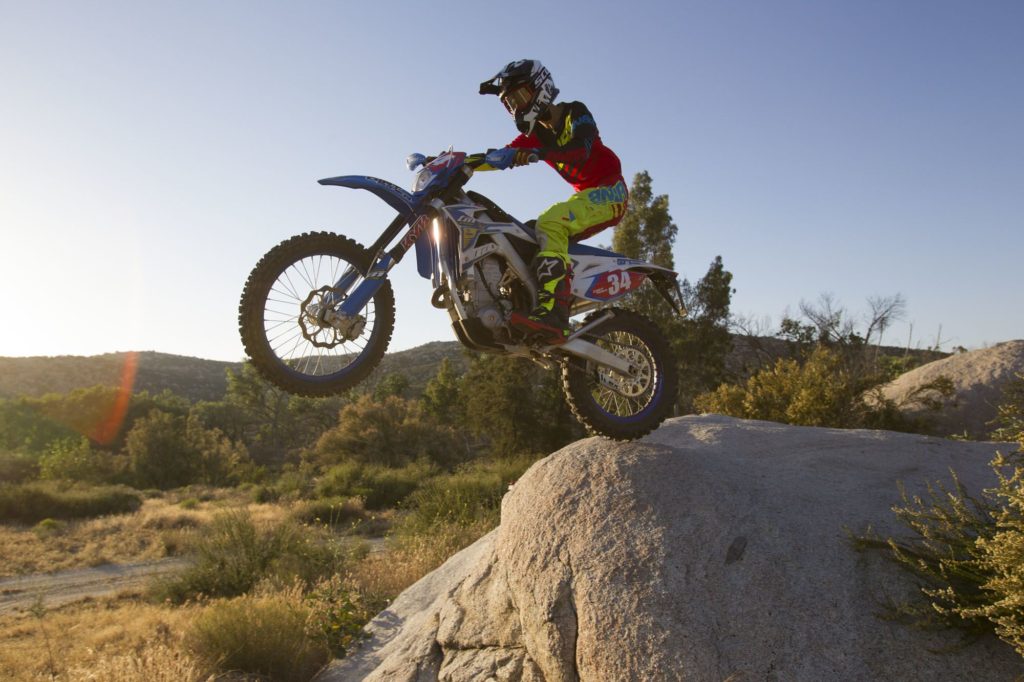 It’s up to you to decide if you get what you pay for.
Photo By Sean Klinger 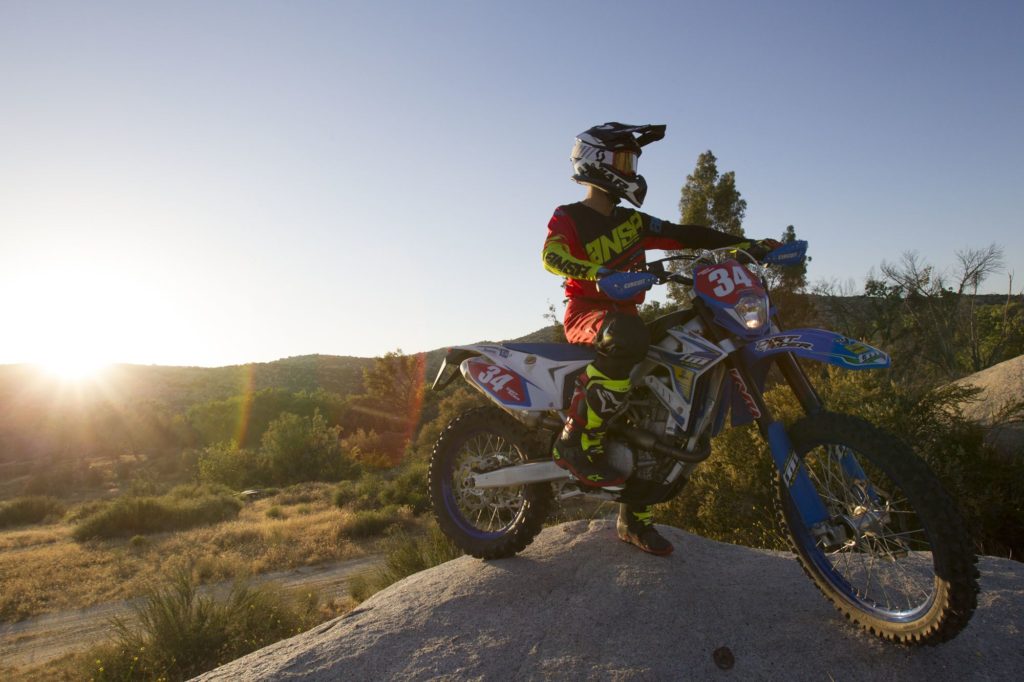 Go to our webshop

Click on the button below to visit our webshop